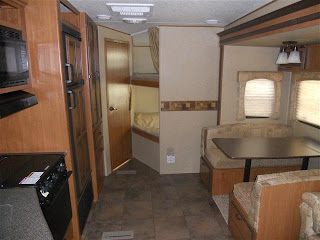 Travel days are always exhausting.  Little sleep the night before and I woke at 430 AM to load myself in airplane, to send myself off to .  In , I meet the gang where we still have another three hour drive to get to the start of the ride.

I definitely feel like I will be traveling in the life of luxury.  The trailer is twenty seven feet long and I have my own bed, or rather, a bunk bed. This trip I will not be sleeping on a cot but in my Egyptian silk sheets and goose down pillow.  Whoever would have thought I would say I was living a luxurious life by staying a trailer for a week.  There is a bed, bathroom, and A/C.  Much better than the thousands of others tent camping.

The shower will not be the freezing , but a bathing suite and a water hose.  Standing outside is better than waiting an hour and half to pay $5 for a shower.  It is said that 8,500 official riders are signed up for RAGBRI and another 10,000 hop in on along the way.

There is the usual sense of nervousness and anxiety; where will I go to the bathroom, where will I shower.  But all that stuff usually works itself out and enjoying the ride take precedent.  They say that RAGBRI is a moving party, lots of beer and lots of music- every night.  I have never ridden my bike drunk or ridden hung over. As the saying goes, there is a first time for everything.
Posted by Unknown at 1:18 PM