There is no way I would let you down and not share my story from the weekend. This picture says it all with the look on my face. D gave me permission to publish his picture. At least that is what I heard. Hopefully, he could hear me over the ear busting music. I believe I am a little more deaf today. 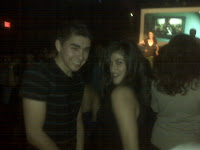 After drinking a couple of margaritas we headed over to a local club in town. The story goes that this club plays 80’s music. It turns out they play a mix of 80’s music and the latest hits are broadcasted on a local radio station. We hear that we should fit into the crowd easily since it’s supposedly an older crowd. But, not so much. The crowd ended up being a VERY young group and a little rough around the edges. The dancing is hip hop.

Two boys pop dancing brought me a smile. It was SO cool! There was a circle around them and they were sliding and popping all over the place. D grabbed me and started to teach me. We danced song, after song, after song. I had a blast trying to pick up the moves. Though it didn’t really work for me, it was fun trying.

I have three more weeks of dancing then seriously, I am going to get serious about training.
Posted by Unknown at 3:34 PM